Vampire, werewolf, troll, ker, chupacabra — the names are as subtle and subjective as they are distinct and seemingly endless. Your life among the Hungry has been complicated and painful. It has cost you much, and yet it has also been undeniably rewarding. You have been hurt, but you have also hurt others. You are a Predator, and that sort of thing is to be expected.

No Sacrifice Without Blood is a modern gothic tabletop roleplaying game about the lives of immortal, cannibalistic beings called Predators. It features:

No Sacrifice Without Blood is a storytelling TTRPG about immortal predators.

The PDF is 19 pages, with a clean, bare, and easy to read layout. The cover art is tone-setting and evocative, and the text has no interior art.

Setting-wise, No Sacrifice could be compared to World Of Darkness. Predators live eternally, in secret, hidden amongst mortals. They have unique weaknesses, and long-running grudges with each others, and can only sustain themselves at a cost to the humans around them.

Mechanically, No Sacrifice is fully story first. Players freely define their own powers and weaknesses, and the only limitation is that they must have as many weaknesses as they do powers. However, No Sacrifice does still have a mechanical resolution system.

Players draw and play sets of red and black playing cards, adding up the total number of cards in each set to meet or exceed a target number set by the GM. Red cards are always failures, but players may sacrifice them to treat them as black cards while also gaining points of Boon. Boon increases deck size, turns into positive Pang at the end of a session which awards various bonuses, and can also be spent for minor benefits in the story. It's technically also possible to sacrifice black cards, but doing this causes you to fail your roll, permanently reduce your deck size, and take negative Pang at the end of the session, so I'm not sure why anyone would do this.

In terms of combat, players can refill their decks by sleeping or preying on mortals, and players that get injured need to reduce their maximum deck size to heal it. Until then, they increase difficulties for all actions. Wounds don't seem to be able to kill, but running out of deck capacity can. In general, the game seems to want conflicts where both parties walk away wounded rather than conflicts where one side ends up dead.

In terms of GMing resources, No Sacrifice has some safety tech and some setting guidances. However, it relies on the GM having an idea of the kind of story they want to tell, and the players leaning in on the atmosphere and pacing. No Sacrifice feels like the kind of game where the mechanics should only be invoked when they have to be, so it's also worth playing this with a group that prefers that kind of style.

Overall, if you like modern gothic supernatural stories---especially about desire and suffering---and you want a loose, flexible system for telling those stories, No Sacrifice should be on your list of games to try. It's less of a game for fighting monsters, more of a game for fighting each other and brooding, but it's sleek and well designed and will make for some great in-character drama.

this sounds totally like my thing, for sure checking this out 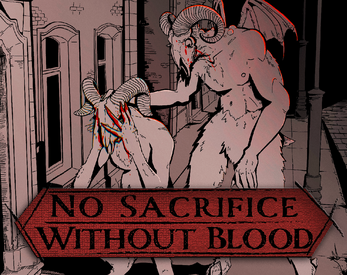